This story is for Noah & Otto

Thanks for drawing with me. @Soulshifecafebridport

This is my first time letting Billy out to fly!
Deep in the woods near the small town of River Vale, Bill stretched out his small bat wings and dropped into the cool evening air still fresh and moist from a long summer rain. His mum shouted after him,

“ Billy, Billy, you forgot your pouch,” Billy swooped and hovered just above the cave calling out,

“ It’s ok Mum, I’ll find my own food tonight.” Billy’s Mum knew the rain would have washed away all the gnats and bugs and without his pouch, Billy could go hungry. Inside the ouch Billy’s Mum had lovingly prepared a snack for her son of small bits, mosquitos and a big juicy moth. It was the best of all foods for a young bat, But tonight Billy wanted to find his own dinner.

Diving wildly into the night Billy knew that, as a very young bat, he still has a lot to learn about the dangers of flying and hunting. His uncle and cousin had taken him out a number of times befor to learn how to use his echo-location and hunt for food, so Billy really wanted to show everyone he could do it on his own.

As he flapped his wings as hard as he could . he climbed high above the trees. Then pulled his wings in and tightening them he dropped down really quickly swooping low along the swelling creek which was littered with logs and toys washed down from the storm. 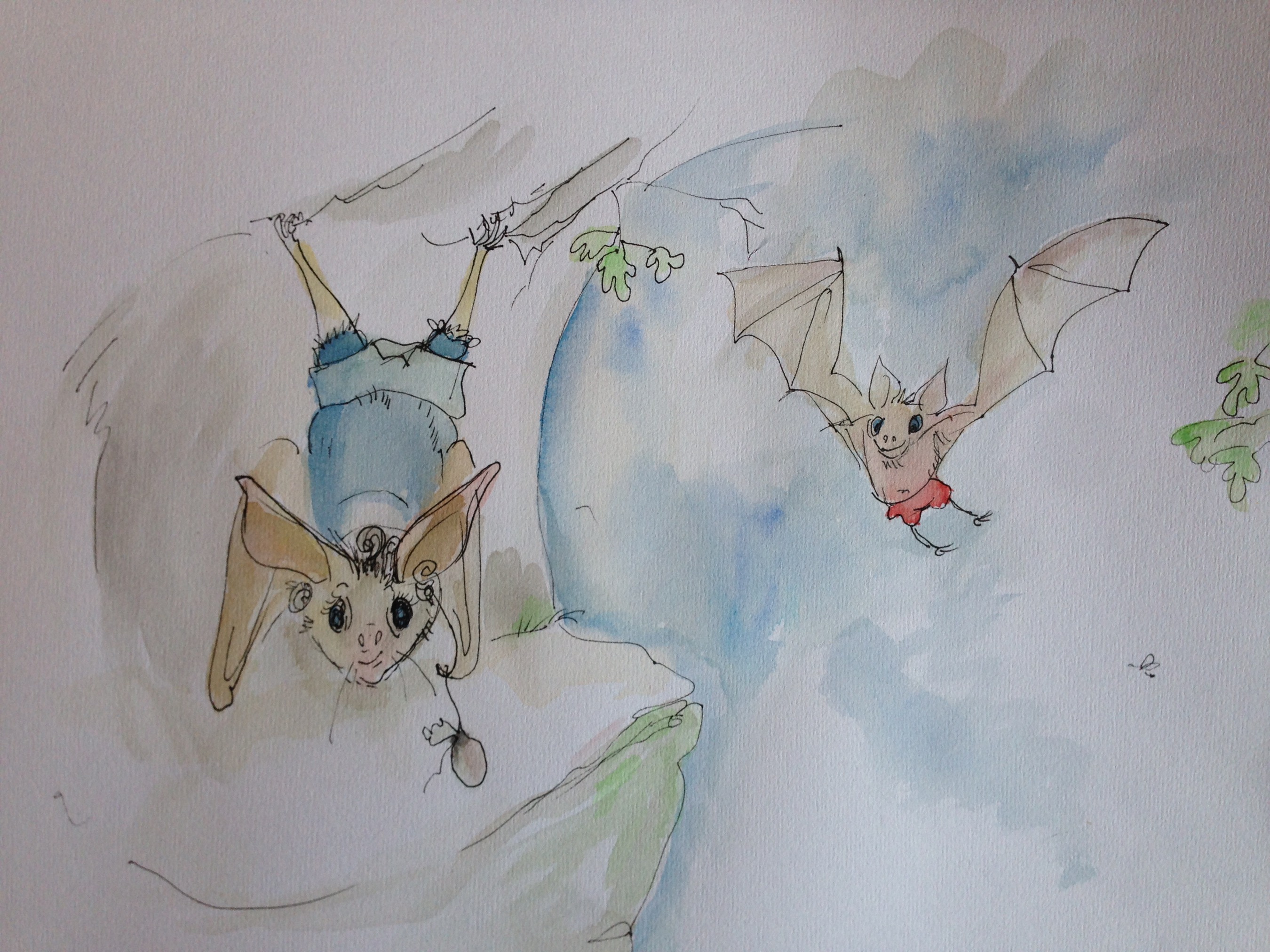 Flying up again and then down, swerving around the trees Billy learned hold his mouth slightly open so he could catch all the yummy morsels as he flew along. Tonight there weren’t many bugs and he needed to fly closer to the lights.

The only light he could see was o the outside of a house near the creek. He knew he ought to avoid houses, they were brought with danger. The closer Billy flew to the light the juicier the bugs became. The brighter the light the more billy had to close his eyes. Now he could test his echo-location . This was how bat’s flew in the dark. It was a bit like closing your eyes and throwing a ball against the wall. Billy did this with bugs.

Flying back and forth, to the left and then to the right around the light, Billy noticed a gap in the wall. It made him curious and at the last minute, as he dove down again, he slipped through a gap in the wall. The walls of this cave were flat and solid, this was like no other cave Billy had ever flown into.

Feeling dizzy, and trapped, he could only fly round and round in circles.

In fact, Billy had flown through and open door which led right into the basement of 600 Blue Hill Road, the home of a large family with lots of children. That night two of the children were playing near the basement door and they couldn’t believe their eyes as Billy came swooping in .

Round and round the room billy flew. It was’t long before he started to grow tired. If only he could find a ledge where he could rest and catch his breath for a minute. Just as he was about to land on a small window sill the little boy named Michael grabbed a broom and took a swipe at Billy.

His little sister Suzie squealed, loudly. Billy saw the girl open the outer door really wide to give him a chance to escape, she was tried to stop the boy from hitting him. Just as Billy dipped down to slip through the open door,  the boy swung the broom wide, hitting him hard and knocking him down on a pile of wood that lay in a tall stack. Michael cheered cruelly and jumped up and down, Billy could still hear everything but lay there very still.
drawing here 3
Michael and Suzie peered down at the bat poking Billy with a screw-driver. Was he still alive?

They knew not to touch wild animals as you could catch diseases. Michael was so wound up he rand around the basement flapping his arms and shouting, “ I got him I got him”. And up the stairs he ran to tell all who would listen, how clever he was and that he had killed a bat.

Suzie looked carefully at the poor creature. He looked quite sad and helpless. curmpled up on the wood pile like a brown rag. She felt very upset because it was she who forgotten to close the basement door that night. She thought she could see his fury chest moving up and down. Susie put the bat on a big brown leaf that had blown in from the yard and folded him up in it like a blanket.

With close peg she attached the two sides of the leaf so as to protect him. She hung him upside down on the small tree near the opening of the back door. If  he was still alive it was important to hide him because her brother would want to finish him off or worse feed him to their big black cat named Jet.

Suzie prayed he was still alive. After washing her hands in the basement sink, she splashed some water on the leaf just in case the little bat needed a drink.

Billy felt the cold water hit him but he was still very much in shock. He thought that maybe all of this was just a bad dream and he was really tucked up in his bat nest and that soon his Mum would wake him up with a cup of nettle tea. The water dripped slowly down the leaf and then as he drew in a deep breath in  the water went into his mouth and ran down his sore throat. Billy hung there in the night for a while stunned and aching. finally he struggled from his stooper and slipped out of the leaf and dropped hard on the dirt floor below.

Billy walked for what seemed like miles, all the time calling out for his family with the special code they had created. It was a very high pitch call so none of the other animals in the woods would know he was in trouble. Even thought he lived in the woods, Billy felt lost and very alone. It was turning into a very long night indeed. Suddenly, and with now warning, his call was answered, faintly at first but growing louder. At last his cousin swooped down really close nearly brushing Billy’s ears. In the end it took three bats to get Billy home safely that night as they had to hold hime and fly him back to the safety of his cave.
drawing here 6

Luckily his Mum had gone to bed early that night and Billy limped as quietly as he could straight for his bed. Hanging upside down Billy slept for ten hours straight, He was awoken by his Mum in the kitchen stirring his favourite moth soup. This would soon make Billy Feel much better and have him flying around the woods again very soon. A great lesson was learned that day and Billy would never forget it. The bright light outside the house that attacted the juiciest bugs and yet flying to close had nearly cost him everything, He would be more cautious in the future and stick to the woods that he knew. ( all except on nigh soon after, when Billy flew by the house on final time and saw Suzie in her window, She looked sad and worried,

Billy remembered her kindness and flew by her window and let her know he was OK. As Suzie saw billy her heart leapt with joy. She waved and she smiled and Billy flew off into the night, the end .
Thank you so much for visiting

Remember to come back and see Billy and watch his progress.

As he has lots of adventures…… 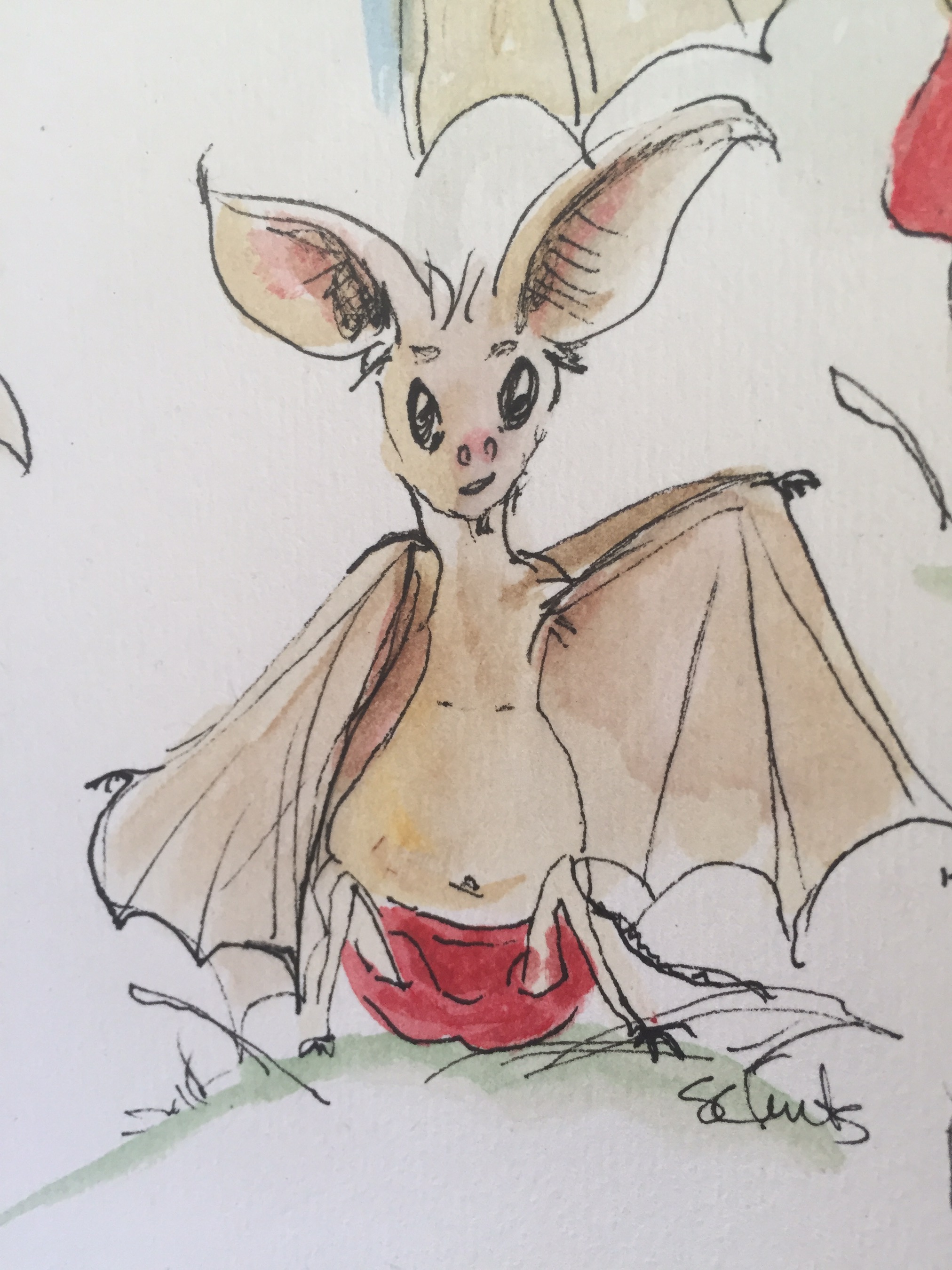 Story and Drawings By

Ideas and inspiration for creating art with passion!

The heavens are telling the glory of God; and the firmament proclaims His handiwork. Psalms 19:1

Learn about Goan and Indian Recipes

poetry, flash, non-fiction, and art with an edge

Lifestyle of an American Expat & her husband in Dorset.

A blog about my dog and other ani-mates

The works and artistic visions of Ken Knieling.